Unveiling of the Memorial Stone at Lavington Gardens, Bridgnorth on Saturday 3rd July 2010.


Peter Williams 5028698 has kindly written this account of the event.

In early July 2010, after months of preparation and setback, representatives from Bridgnorth Town Council, RAF Cosford and veterans of RAF Bridgnorth gathered at Lavington Hole Gardens, just a few minutes walk from the terminus of the Cable Railway in Low Town. The focus of their attention was a memorial stone to commemorate the links that had been forged between the Civic and Military organisations and between townspeople and recruits between 1939 - 1963.

Guests of Honour on this occasion were Wg. Cdr. John Stanfield of RAF Cosford, and the Lady Mayor Mrs.Val. Gill of Bridgnorth Town Council. The W.Cdr. opened his remarks with typical Irish good humour, but he moved swiftly on to the matter of the moment by reflecting on the process of change that had overtaken society. He remarked that from the time he joined in 1970, he recognised that although it couldn't escape it, the Service found a way of coping with it. The Service counterbalance is to uphold its core values, namely those of Respect, Integrity, Service and Excellence that remain unchanged to the present. They were instilled into recruits at Bridgnorth and are still valid today with trainees at RAF Cosford.

Neither does the Service isolate itself from the Community, but seeks to apply these tenets within the local area, as evidenced by work done with youth groups, emergency relief or local crises as they arise. In conclusion he gave another example of the tightness of the bonds between the civil and military organisations by reminding us of the occasion when R.A.F. Bridgnorth became the first station to be conferred with the status of Freedom of Entry into the Borough. 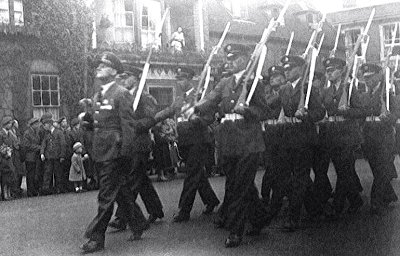 In her remarks, the Lady Mayor re-echoed the community theme and she spoke proudly of the links that were forged between Citizens of the town and the recruits, many of whom had been invited into their homes and firesides. There was a certain irony in her remarks as she turned our attention to traffic passing close by with a reminder that this was the route taken by each new intake of recruits from the Railway Station, over the Severn and up onto the hill above the town. They would of course be completely unaware of the fact that they were passing a site where a simple ceremony, would one day commemorate their stay. It was a poignant reminder of days past. Before the unveiling, Haydn Smith, a Bridgnorth veteran, thanked everyone for their presence and gratefully acknowledged the help given by former Mayor Councillor Brian Jones and for the commitment to the project made by Councillor, the late Mal Griffiths during his time of office. 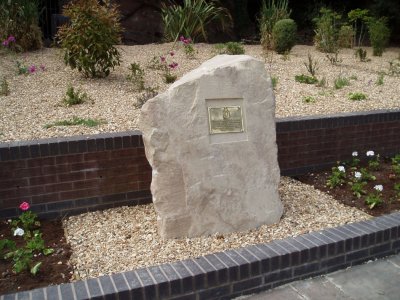 The buff coloured sandstone is about the average height of a man and as broad as a rugby prop forward.

The block weighing two tonnes was hewn at Grinshill quarry near Shrewsbury.

A recess has been cut into it to hold a brass plaque, held in place with high security fixings.

The inscription reads as follows.

This memorial commemorates the bond that exists between the people of
Bridgnorth and the former Royal Air Force Station Bridgnorth (1939-1963).
It records the contribution to World Peace during those years
of conflict, by the men and women who were trained there. 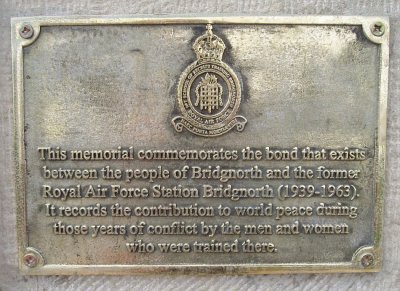 The site, at Lavington Gardens, was looking its best. It had been cleared of litter and weeds for several days beforehand and had been brightened with fresh gravel. The immediate area around the stone was enhanced by geraniums that had been planted in raised beds by local groups of Girl Guides and Rangers.

Our pleasure at seeing this memorial completed was dampened a little by a low turnout - about 35 in total, which included wives, partners and guests who had gathered to see a tangible and long overdue reminder of the camp's existence and a tribute to all who had been there.

Click on the image for a larger view. Use your 'back' button to return here.